The summer of 1995 I learned about many new and old techniques in healing and identifying weaknesses in the body. I had used alternative medicine in the past, but not with energy and communication. My riding partner and last 20 year companion, Britches (a horse) had an abscess high up in his front hoof which was misdiagnosed so received the wrong therapeutic care for many months before I turned to inter-species communication and energy medicine. I have been able to use the techniques that I learned on myself, friends and other animals. This made up for missing 5 months of riding and the complete “95” endurance season.

After many years of strong legs and no indication of arthritis, Britches came up lame 2 days after a conditioning ride where we galloped up a logging road that was much harder then the last time we rode on it. We were planning on attending a 50 mile endurance ride in a few days time. Because of past abscesses I assumed he had another and put a soaking boot on the hoof (with Epsom salts). By Thursday he still was lame and I cancelled our weekend plans.

My next step was to pull all the shoes off. After looking over the hoof, the farrier could not find any sign of an abscess and suggested butte and rest, then to call a vet if there was no improvement. I then had the vet out (who is also an animal chiropractic), he found no increased pulse and no sign of an abscess, so he started blocking the hoof, with plans to go up the leg until Britches was sound. The first block confirmed that what ever it was, it was in the hoof area. The vet then x-rayed the hoof and found bone spurs and signs of hoof degeneration. He then decided that Britches had arthritis and gave him a shot of Legend and suggested feeding MSM (the Legend had no results). I then talked with a friend who said that 50% of endurance horses, if x-rayed, would have the same hoof signs and not to give up on Britches yet!. I then talked with another farrier who suggested adding ENFLAMX and Flex Free (Chondroitin Sulfates). I was also giving Homeopathic Medicine, yucca, and herb formulas for arthritis.

After 6 weeks Britches was not better or worse, so I decided to call the vet again. The first vet that had come out was out of town so I had another one in the same practice look at the x-ray with me. He said that Britches would only get worse and I would not be able to ride him in the same way I had in the past (he also suggested all types of horrible hoof problems that could be the issue). This was very depressing, but I was not going to stop at traditional medicine. I was at a loss as who to call. I did not know any alternative medicine equine vets in the local Puget Sound area at the time (I now have a great alt equine vet).

Spring of 95’ I attended an animal communication workshop and had started communication with my animals at home. I was letting my dogs know when I would be late and they stopped worrying when I was not home at the normal time. This encouraged me to find an animal communicator to help me with Britches. In addition I had many years of experience with helping my dog, who has a bad case of arthritis and was not convinced that this was what Britches had: for a couple of reasons. Britches lameness was consistent while arthritis normally fluctuates and he has a high pain tolerance and in the past had not shown normal responses for the injuries or conditions he has had. I had heard of an animal/equine communicator near Bellingham and he agreed to come down to my farm, 100 miles south. By this time Britches had been lame for 2 months and it was the end of June.

The animal communicator I found, Jim, did body work, chiropractic, energy testing, and kinesiology was amazing: he nailed all my animals’ personalities on the head. He helped my geriatric dog with back problems and convinced him to stop barking all day while we were away at work. Jim used and showed me how to use kinesiology to find the weakness in Britches hoof and he communicated with Britches who told him that there was something foreign inside his hoof and that was what was causing the pain and not the arthritis. In the end we determined it was an abscess high in the hoof.

After this visit I continued the supplements and homeopathic formulas for arthritis, but added homeopathic formulas for infections and abscesses. Using Kinesiology, I followed the infections energy path down the hoof, then it would recede back up the hoof. This continued for the months of July and August. Over Labor Day weekend I visited fellow endurance riders and talked with a farrier. He said if I knew where the abscess was and it was high up in the hoof that it would never come out on its own. He suggested that I drill a hole in the side of the hoof. After directions and the purchase of a farrier’s knife, I drilled a small hole. I put the hoof in a soaking boot for 2 days to draw out the infection: 95% of the lameness was gone!!!

Britches was still a little off so I called the animal communicator again. Jim had me look at a picture of Britches and place my finger over the hoof; he said that the abscess was out, but the joints in the other legs were compressed due to uneven weight bearing. I then went out and used the energy testing on the joints and found they were indeed weak.

During a discussion with a friend who does human body work, she suggested trying polarity therapy. Polarity therapy is used to release energy blockages and restore a balanced energy flow in the body. She told me how to do this and I first tired it on a friend who had many blocked areas, it worked great. I then tried it on Britches and released the compressed joints. This caused him to be better, but not 100% (maybe 99%). After talking with an Occupational Therapist friend, she said that she had to train her kids to use parts of their body again after injuries. So we decided to turn Britches in a tight circle each day to show him that he could use the former lame leg and tell him that he could put weight on that hoof again. After 2 weeks Britches was 100% sound!!! We went on our first ride after 5 months and he was very sound, just very fat and out of shape. We both had a great time.

It has now been 15 years since the abscess was healed in Britches hoof. At the age of 29 he is very sound and looks years younger and goes on long rides in the woods. We keep his arthritis in check with supplements and special boots /pads to help with the rocky logging roads. I am very grateful for all that I learned with this experience as it helped me with all the animals, my family, and myself.

Update, Britches decided it was time to move on July 2013 at the age of 32, he was still sound and happy…we all miss him very much.

Got Dogs or Cats ???
Live in the Seattle, Bellevue, Redmond, Woodinville, Duvall or Monroe area?

Check Out Mystic On Review Sites 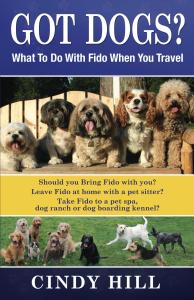 Find Dog Care book, by Cindy Hill.
"Got Dogs? What To Do With Fido When You Travel" Should you Bring Fido with you? Leave Fido at home with a pet sitter? Take Fido to a pet spa, dog ranch or dog boarding kennel?
To view on Amazon just click on the book image.

Cindy@MysticMountainRetreat.com
(best to send an email)